In Their Words—The Story of Annie Etheridge, Civil War Nurse from Michigan. 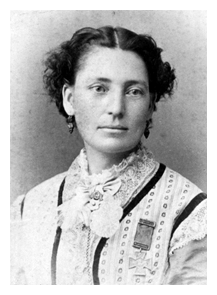 Once of newspaper renown, few today know the story of this remarkable woman, who, at age twenty-one, volunteered to serve her country from 1861-1865 as a nurse. Many of the stories that are told about her contain repetitions of erroneous information. While other famous women of the Civil War, such as Louisa May Alcott, Cornelia Hancock, and Sarah Emma Edmonds published their memoirs, Annie’s story was left to be told by newspapers, her contemporaries and those who knew her best – the soldiers who served with her in the Army of the Potomac.
“The world never produced but very few such women, for she is along with us through storm and sunshine, in the heat of the battle caring for the wounded, and in the camp looking after the poor sick soldier, and to have a smile and a cheering word for every one who comes in her way. Every soldier is alike to her. She is with us to administer to all our little wants, which are not few. To praise her would not be enough, but suffice to say, that as long as one of the old Third shall live, she will always be held in the greatest esteem, and remembered with kindly feelings for her goodness and virtues.”

These words were written by Color Sergeant Daniel Crotty, of the Third Michigan Volunteer Infantry, in his book Four Years Campaigning in the Army of the Potomac. They describe his respect and appreciation for Civil War nurse Annie Etheridge of Michigan who performed extraordinary deeds on the frontlines of battle amidst all the same dangers and peril the soldiers themselves faced.